Blythe Vale after a storm


This is from a postcard, which has, 'Blythe Vale after the storm, June 14th 1914' inscribed on the back. This would make it about 6 weeks before WW1. Clearly summer from the look of the trees as well as the shirtsleeves worn by the chap on the right. The picture itself must have been quite an event given the number of people in the picture - including quite a crowd at the end of the flooding towards Stanstead Road.

Today, the drains look to be working better. As I write this, we are awaiting Storm Dennis, due to bring a month's rain in 1 day. Following already water-logged ground, lets hope the drainage does work better than it did then. 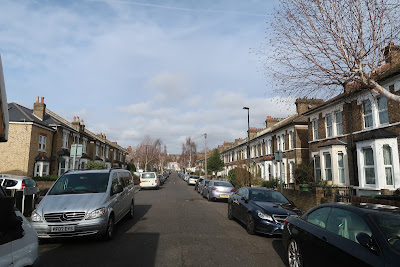 
This is the scan of a photograph rather than a postcard. The tramline existed from about 1913 to 1951, and I am guesstimating this picture as about the 1930s based on the style of cars - I have no real idea of date.

I love that the car on the left appears to be on the wrong side of the road and the cyclist is swerving to pass it. I hope he made it!

The modern day picture shows that the Blythe Hill Hotel has become the Blythe Hill Tavern and public transport is still toiling the route - buses ironically being the very reason for the demise of the trams in 1951.

Woolstone Road - Lutwyche Road off to the left


It took me a while to work out exactly where on Woolstone this was taken, but the the garden pillars were the clue that helped in the end. It must have been a lovely thoroughfare with all those trees. Far fewer now, but I imagine they are the same ones.

If you look very closely, there is a car further down the road on the left with two people sauntering over the road ahead. No concern of being run over, despite the lack of speed bumps that blight the road today. I esecially like the lady pushing a pram on the right, her big white blouse is very of its time.  I have guessed the date. This card was sent from Catford possibly on 29 April 1910 - I'm only certain of the April.

I will try and retake the 'now' picture in the summer when the trees are in leaf - and I may even manage to get someone with a pram to walk on the right. Would look better than the wheelie bins on the same spot.

Now & Then: Vancouver Road (near Hurstbourne)


I went through a phase a few years ago of buying old postcards of near where I live in Forest Hill, South London. The aim was always to try and take the same picture now and post them on here. At long last, I'm doing it. The first is chosen as it has my house on it.

In this picture, I'm struck by the old church, which subsided and was demolished in 1999, being replaced by a new structure which is a lot less imposing and presumably less likely to sink! You can just see the new spire in the 'today' picture.

The horse drawn cart and noticeably no traffic make the street look very different to today, as well as the original garden gates and fences - so much smarter than the hotch potch of driveways, dropped kerbs and council waste bins that you see today.

Fair / Fayre - whatever! The one by the pools last weekend was the first Forest Hill Fair as part of the SEE3 Portas Pilot thingamajig.

I have to own up to Fayre ennui at this point. In part due to the fact that I NEED to find presents for the men in my life and also having taken up glass fusing and living with a wood lathe in my spare bedroom, I do not need any more trinkets. Which reminds me, I'm meant to be buying for others! So I wasn't really in the mood when I went fair Fayre shopping on Saturday. But despite the rather empty look from the photo above, there were a few good things of note.

South London Prints do some very cute prints of local sites, including the Horniman and one I especially like of Crystal Palace. If you missed them at the fair, they are sold in Bunka as well as 'Pen & Gravy', the Christmas pop up shop in Kirkdale.

Isa Marie Skincare I had heard of before via twitter. Abandoning my 'buying for men' quest (didn't take much), I bought myself a pot of Body Butter Souffle, which is superb. The girls on the stall (I think Isa Marie is actually Marianne and is on the left!) were also lovely, as were all the stallholders I chatted to, which made for a nice afternoon out and for me made this a pleasant addition to Forest Hill.

Finally, I bumped into a lady who I had met at the jewellery class a few weeks ago who owns a modern retro homewares shop in Stoke Newington but is local to SE23 (who I remembered as camera shy - she is off stage right). The shop is the rather fabulously named, 'Committee of Taste', and some of the smaller stock came to Forest Hill on Saturday. The owner said she had had a good day and was thinking about what to bring next time and was hoping to bring some children's pieces as she had had a good few customers with kids.

For a first run, I think the fair went well. We should expect these fairs to continue as part of the SEE3 project and hopefully the fun arts and crafts items will stay. For me, these were the most interesting to potter around and complement what we have on the High Street.

As for my Christmas shopping however, this wasn't to be. I have since had quite a bit of success on the presents buying front - but posts for these will need to wait till after the 25th if I want to maintain any element of surprise. Suffice to say though - I've done it!

For the last few years, Jumping Bean on Honor Oak Park has been the provider of all my Secret Santa gifts. An easy stop from when I get off the ELL at HOP, I often do go in for a mooch around on my way home - which is one of the things I especially like about this place - it is open at hours that are convenient for me.

With my SE23 shopping challenge hat on, I went in and had a good look round the other Monday after work (open, on a Monday, love it). There is a lot of stock, in a fairly small space, so it does to take your time. I noticed quite a few things for men, which makes some difference to a lot of other gift shops - think cuff links, scarves etc. as well as some nice picture frames. I know they also have a little den of kiddies stuff at the back (due to my allergy to children, I have never been in that bit).

As usual, I saw quite a bit I fancied for myself! Indeed, I wish I had seen this iPad case when I was looking for one a few months back. At £15.99, I think it is a lovely item. I ended up on etsy for mine, which is a shame, because I did look around Forest Hill first.

The other thing I thought was great were these porcelain measuring spoons - not terribly practical, but very cute.

This time last week, I attended a jewellery class organised by the Forest Hill Society. Paul Ravn has been a lecturer and silversmith throughout his career and now owns a jewellery workshop along with his wife Tomoki.

In 3 hours, seven of us had twisted silver wire, soldered, sawn and bashed (probably not the technical term) our way to creating a ring each.

It was lovely to learn something new on a wet Saturday afternoon and meeting other locals. It turns out that the lady opposite me lives on my street! Best of all is taking home something real, so I am looking forward to going back in January to finish the pendant we started and maybe move onto a brooch. I haven't taken the ring off!

poppag_girl
Local resident (as of April 2008), interested in the neighbourhood and its history.